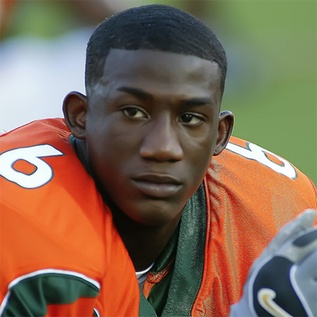 Antrel Rolle came out of South Dade High School with many accolades: No. 1 cornerback in Florida, No. 2 overall prospect in the state and No. 14 nationally, first team All-State, and Parade All-American. So it was no surprise that Rolle fit right in with what is arguably the greatest team in college football history.

Antrel was one of only 4 true freshmen who saw extensive action during the 2001 National Championship season. Most was on special teams, but he did get his first collegiate interception against the Washington Huskies.  As a sophomore starter in 2002, he earned All-Big East first team honors as selected by the league’s coaches for his 66 total tackles, six for loss, and 2 sacks.

As Rolle’s reputation as being virtually impenetrable in man coverage became known by shutting down top receivers such as Pittsburgh’s Larry Fitzgerald, teams began shying away from passing to his side of the field.  But Antrel still accounted for 51 total tackles and 2 interceptions in 2003.  UMSHoF member Coach Larry Coker also used him again on special teams and he had 13 punt returns for 203 yards (a 15.6 yard average). He took one punt back for a 66-yard touchdown against Louisiana Tech in the same game that he returned an interception for a 30-yard TD.

Rolle would have a phenomenal senior campaign in 2004, named a consensus first team All-American, winner of the Jack Tatum Award as the best defensive back in the country, and a finalist for the Jim Thorpe Award.  He was also named first team All-Atlantic Coast Conference (ACC) as he held two ACC All-American receivers in check: Fitzgerald (26 receiving yards) and Georgia Tech’s Calvin Johnson (10 yards).

Antrel graduated Miami with a Bachelor’s degree in Sports Administration with a minor in Finance.  The 8th overall pick by the Arizona Cardinals in the 2005 NFL Draft, Rolle spent 11 years in the league with Arizona (2005-09), the New York Football Giants (2010-14) and the Chicago Bears (2015).

He was a three-time Pro Bowl selection, a 2012 Super Bowl Champion, and in 2014 received the Thurman Munson Award, given to New York sports icons whose success on the field is matched by their philanthropic efforts off of it.  Antrel and Valleen Aguilar have three children: Antrel, Jr. and twins Alani and Azariah.