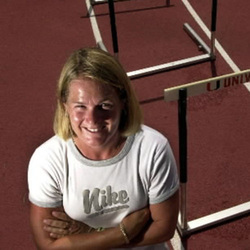 (From the induction banquet program for 2006):

Joining the UM family full-time as the women's track and filed coach in 1990, Deem is one of the most esteemed coaches in her profession.  During Miami's tenure in the Big East, Deem practically owned the Big East Outdoor Coaching Staff of the Year title, winning it seven times in nine seasons.  While in the Big East, Deem's teams won an incredible 79 individual and relay titles, with UM being the only team in Big East track and field history to win four straight outdoor team titles.

Now in the Atlantic Coast Conference, Deem's athletes continue to dominate.  Last season (2005), UM's first in the ACC, the Hurricanes finished third in the NCAA Indoor Championships and led with 12 All-American honors on the squad.

Originally from West Virginia and a graduate of Ohio University, Deem is proud to be at home in Hurricane country.  As the longest-serving continuous track and field coach in University of Miami history, Deem's record as head coach is jaw-dropping: she has coached athletes who've won a combined 80 All-American honors, was named ACC Coach of the Year, named Big East Coach of the year several times, served as a junior national team and Pan Am team coach, and has two Olympians on her coaching resume.  Deem's record as a mentor and teacher is just as evident in the classroom, with her student-athletes earning academic laurels and having one of the highest graduation rates among student-athletes.


Amy will be inducted into the USTFFCCCA as part of its Class of 2017 Inductees...


Coaching any sport for close to 30 years is a feat unto itself. Lasting that long in the profession at the same school is evidence that one is doing something right.
Since 1990, Amy Deem has been a part of the Miami (Fla.) track & field program, as the native of West Virginia was named the women’s head coach that year while serving as an intern in the compliance department.
By 2008, Deem was named the Director of Track & Field/Cross Country, becoming just the sixth woman to oversee both the men’s and women’s track and cross country programs at an NCAA Division I institution.
The secret to Deem’s longevity in Coral Gables is simple: she’s won.
Deem turned the Hurricanes into a national powerhouse. Prior to her appointment as the head coach in 1990, no Hurricane had recorded an NCAA qualifying mark. Since then, however, Deem and the Hurricanes are a regular fixture at NCAA Championships, as her athletes have laid claim to 14 national championships and nearly 200 First Team All-America honors.
Under her guidance, the Hurricanes’ hurdlers have dominated the national scene. Seven of the aforementioned 14 national championships have come in the hurdles, including an astounding five from Gillian Russell.
As a team, Miami (Fla.) have finished as high as third during the indoor campaign and seventh on the outdoor circuit.
Deem saw her women dominate the Big East during the early portion of her career, capturing two indoor conference championships (2003 and 2004) while laying claim to six outdoor titles (1998-99, 2001-04). Despite leaving the conference shortly after the 2004 title, Miami (Fla.) still owns a pair of conference championship records (4×100 and 4×400).
And since joining the ACC in 2004, Deem has won more ACC Women’s Indoor Championships (four, including the 2017 title) than all but one coach in conference history.
Deem has also made her mark on the sport outside of her tenure as coach of the Hurricanes. She served as the President of the United States Track Coaches Association from 2003-05, in addition to serving as the head coach of the United States team at the 2007 World Championships and the 2001 USATF Junior National team that competed in England and Scotland.
Deem’s success at Miami (Fla.) landed her the duty of serving her country during the 2012 London Olympics, where she was the head coach of the United States women’s team where her team posted one of the most dominating performances in USA Olympic track and field history. The team won 14 medals, including six gold, four silver and four bronze. Three of her former athletes – Murielle Ahoure, T’erea Brown and Lauryn Williams – competed in the Games.
In addition to Ahoure, Brown and Williams, a slew of Hurricanes have gone onto Olympic success during and after learning under Deem, including Patrina Allen and Yolanda McCray.
Deem has been named USTFCCCA South Region Coach of the Year several times, notably in 2016 and 2017 for indoor track & field.
U.S. Track & Field and Cross Country Coa

For more information on Amy Deem, go to Hurricanesports.com by clicking this link...

Deem, elected to the UM Sports Hall of Fame in 2006, has been responsible for building the women's track and field program from very modest beginnings into an NCAA powerhouse. Prior to her being named head coach in 1990, the Hurricanes had never had an athlete record an NCAA qualifying mark. Since then, Deem has guided 55 student-athletes to a combined 173 All-America honors and 12 national championships.

Prior to the 2013 track and field season, Deem helped guide the women's track and field team to one of the most dominating performances in USA Olympic track and field history. The team won 14 medals, including six gold, four silver and four bronze. Overall, she was part of Team USA who won more medals and gold medals than any other nation at the Games. Three of her former athletes - Murielle Ahoure, T'erea Brown and Lauryn Williams - competed in the Games. Ahoure (100m, 200m) and Brown (400m hurdles) reached the finals of their events, while Williams earned gold as part of the 4x100m relay pool.

Updated; February 2017...
The 2016 track and field season was monumental in Hurricanes history, as the Miami women won their third ACC Indoor Championship. Deem was named ACC Coach of the Year and USTFCCCA Regional Coach of the Year for the 2016 indoor season.
The Canes had six women qualify for the 2016 NCAA Indoor Championships, with Alysha Newman and Dakota Dailey-Harris earning First Team All-America honors and four other Canes being named to the second team.

Shakima Wimbley was named ACC Women’s Indoor Track Most Outstanding Performer after winning the 200m, 400m and 4x400m at the ACC Indoor Championships. Dailey-Harris was one of several ACC Champions during the indoor season, winning the high jump title. She was joined by Wimbley (200m and 400m) and the 4x400m relay team of Wimbley, Aiyanna Stiverne, Brittny Ellis and Destiny Washington.

There was more success outdoors for Miami's women, as they finished second at the ACC Outdoor Championships, securing a top three finish for the third consecutive year. Wimbley was named ACC Women’s Outdoor Track MVP after winning the 200m, 400m, 4x100m and 4x400m conference titles. She was joined by Stiverne, Ebony Morrison and Carolyn Brown on the 4x100m, and Stiverne, Washington and Ellis on the 4x400m. Newman was the ACC women’s pole vault champion for the 2016 outdoor season.