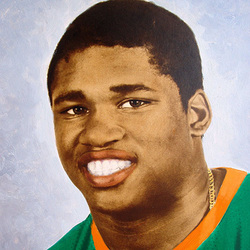 Alonzo Highsmith was an explosive fullback and an offensive leader for the University of Miami from 1983 to 1986.  As one of the top running backs ever at  Miami, Highsmith was a complete player who ran, blocked and caught passes with equal skill and determination.

Originally from Miami, the former Columbus High School standout recorded five 100-yard rushing games, tying for the second highest total in 'Canes history, and rushed for a team high 50 yards and one touchdown in the 1984 Orange Bowl Classic as Miami captured its first national championship.

Highsmith was selected in the first round, third pick overall, in the 1987 NFL draft and went on to a five-year professional career with the Houston Oilers and Dallas Cowboys.