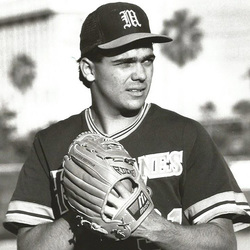 Alex Fernandez came to Miami as one of the most highly sought-after pitching recruits in the country, and in his short time in Coral Gables he lived up to that billing, and more. The 1987 Gatorade Florida State Player of the Year, he left Monsignor Edward Pace High School with state records for shutouts (24) and no-hitters (7) while compiling a four-year record of 47 wins against 4 losses. He capped a stellar senior season where he was 14-0 with a 0.56 earned run average, by pitching a complete game victory in the state championship game. Though he was a first round pick (24th overall) of the Milwaukee Brewers, he chose to join UMSHoF member Coach Ron Fraser's Hurricanes.

As a true freshman in 1989, Fernandez would make an impact immediately as he and his teammates shutout Central Florida in his first start. He quickly became the prime time Saturday night starter, drawing huge crowds to The Light to see him pitch. His finest game came on a chilly March evening as he pitched the 11th no-hitter in UM history, striking out 13 Maine Black Bears and allowing just an 8th inning walk. For the season, Alex would win 15 games against only 2 defeats, with a 2.10 earned run average. He struck out 177 batters in 147 2/3 innings, an average of nearly 11 per 9 innings. He had 8 complete games, tossed 3 shutouts and held opponents to a miniscule .189 batting average, helping the Canes reach the College World Series.

He was named the Collegiate Baseball Freshman Pitcher of the Year, a First Team All-American by Baseball America and was a Golden Spikes finalist. Alex then took his his talents to Miami-Dade Junior College, where in 1990 he would win both the Golden Spikes Award and the Dick Howser Trophy as the nation’s outstanding player en route to being the 4th pick overall by the Chicago White Sox in the first round of the Major League Baseball Draft. He would play seven seasons in the Windy City, then sign with the hometown Florida Marlins in 1997. Following an arm injury that sidelined him from the rotation, he became an inspiration to his teammates and South Florida community as the Marlins captured the World Series title that year. Alex sat out the entire 1998 season while rehabbing his arm, overcoming his setback to earn National League Comeback Player of the Year honors in 1999 before a second injury forced his retirement after the 2001 season. He won 107 games in his 10-year MLB career.

Serving since 2008 as the director of baseball operations at Archbishop McCarthy High School, and as an assistant coach, he has helped lead the Mavericks to four state titles and in 2011, they were named the USA Today No. 1 team in the country. In 2014 he became the fifth Hurricane inducted into the National College Baseball Hall of Fame.