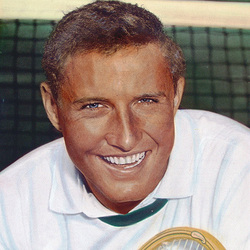 Coral Gables, Fla. – Pietermaritzburg, South Africa native Patrick “Pat” Cramer was described as possessing a backhand and forehand stroke that can only be termed classical. Cramer joined the Hurricanes as a former South African Junior Champion and Davis Cup performer. He represented South Africa in the 1964 and 1965 Orange Bowl tournament. In 1965, two years before stepping foot on the Coral Gables campus, Cramer defeated Germany’s No.1 ranked start and Davis Cup player Wilhelm Bungert.
​
Cramer began his Cane career with a bang in both singles and doubles competition. After posting a singles season record of 17-1, his only loss coming in the last match of the season, Cramer advanced to the semifinals of the NCAA improving his overall season record to 21-2. In doubles play, Cramer posted a perfect15-0 mark. For his success on the court, Cramer was selected to the 1968All-American team.

Despite the almost perfect single season record, Cramer outdid himself during his junior campaign and as captain of the 1968-69 Hurricane squad. Posting a perfect 17-0 regular season singles mark and 23-1 overall, Cramer, for the second consecutive year advanced to the semifinals of the NCAA tournament where he lost to eventual champion Joaquin Loyo-Mayo of USC. In doubles competition, Cramer’s competitiveness and success did not drop off either. After posting a near perfect mark, 13-1, in doubles regular season competition, Cramer, while partnering with All-American teammate Luis Garcia, advanced to the quarterfinals of the NCAA tournament. His quarterfinals appearance brought his season record to 17-2.

As the captain of the team for the second straight year, Cramer’s success continued. Opening the season with a 7 match singles win streak and closing it with a 10 match win streak, Cramer finished the regular season with a 17-1 mark and a 21-1 overall mark. For the third consecutive year, Cramer advanced to at least the quarterfinals of the NCAA tournament. His success in doubles competition was no different. After posting a 12-1 regular season mark, Cramer teamed with Garcia to win the 1970 NCAA doubles title. For the third consecutive year, Cramer was selected to the All-American team.