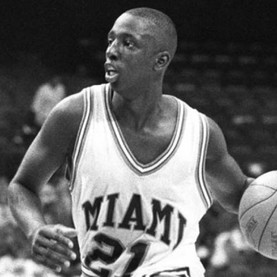 Few have come to University of Miami basketball program with the credentials of Steve Edwards. A two- time “Mr. Basketball” in the State of Florida, Street and Smith and Parade magazine All American, two-time state champion and, along with those of his brothers Doug and Allen, Steve had his jersey retired for Miami High’s juggernaut basketball program. While Doug attended FSU and Allen went to Kentucky, “Stevie” chose to stay close to home and help UMSHoF member Coach Leonard Hamilton develop the Miami program into a winner.
Edwards was named to the Big East All-Freshman team in 1993 as he led the Canes in scoring, including a 26-point performance in their upset of No. 10-ranked Georgetown. In 1995, the Canes earned their first post season appearance in 31 years with a bid to the National Invitational Tournament (N.I.T.) in New York, with UM recording back-to-back winning seasons in 1995 and 1996.

Even though his career was hampered by injuries, Steve led the Canes in scoring three of his four seasons and ranks 13th all-time with 1,393 points. A tireless defender, he is 10th in career steals with 138. One of the school’s most prolific three-point shooters, he left Miami as the school’s all- time leader (now 2nd) in treys with 265, a figure that ranks as the most in Big East Conference history. He was named an ACC Legend by the Atlantic Coast Conference in 2014.

Steve graduated Miami with a Bachelor of General Studies degree in 1996. He played basketball professionally in Argentina and Spain for 12 years. He currently works as VP for Development for Smart Merchant Processing, a company owned by his college teammate and roommate, Alex Fraser.
​
“I am extremely honored to be inducted into the UM Sports Hall of Fame,” Edwards said. “This induction is bigger than me, and I hope to use my story to motivate young people to stay in school and accomplish anything they put their mind to. I would like to thank my parents, who have since passed, my siblings, my daughter Stephanie who is a constant source of pride, my close friends and The U Family.”